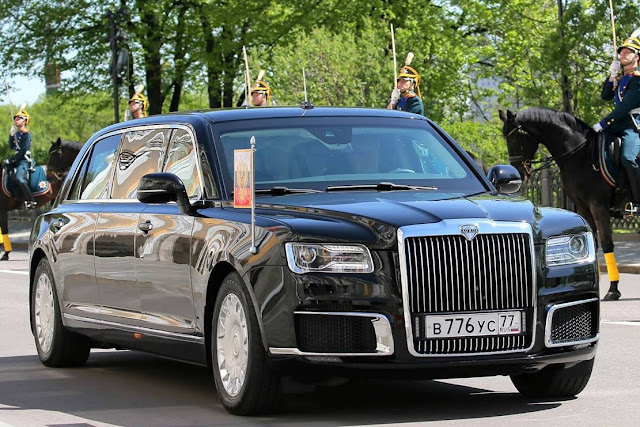 In May 2018, the Russian President's new limousine made its official appearance at his inauguration. 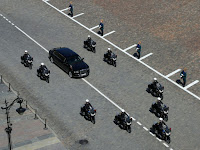 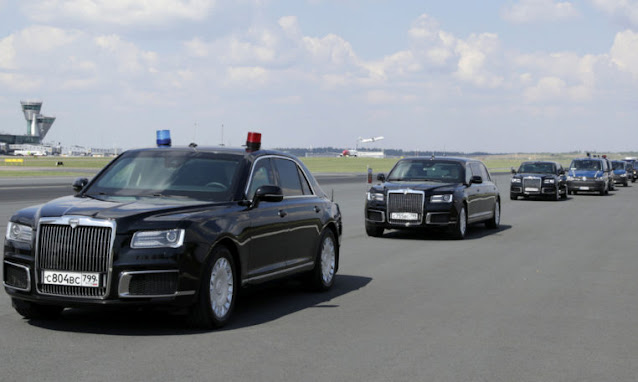 In the meantime, the escort vehicles were replaced by AURUS SENAT limousines. 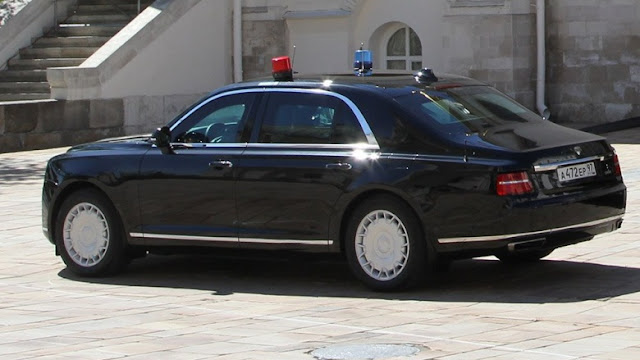 This model of the brand "AURUS" called "SENAT" is the result of a global project of the same name that was launched in 2012, of the will of the Russian President, to compete with Western luxury limousines. 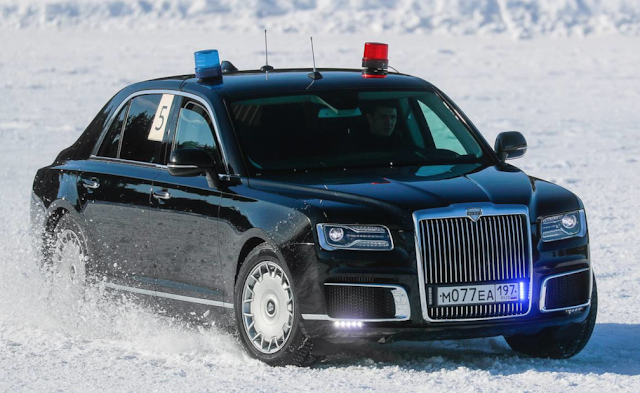 Drivers take ice and slippery road courses to control their vehicles in case of loss of control.
Here is a video of its design 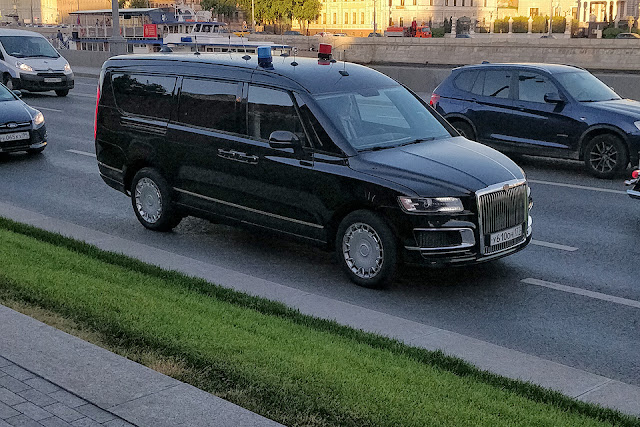 Another model, the AURUS ARSENAL also accompanies the presidential escort. 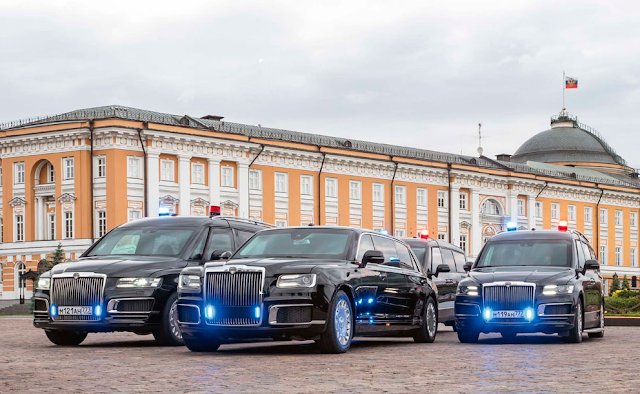 They are all around the Russian Presidential Limousine when it moves. 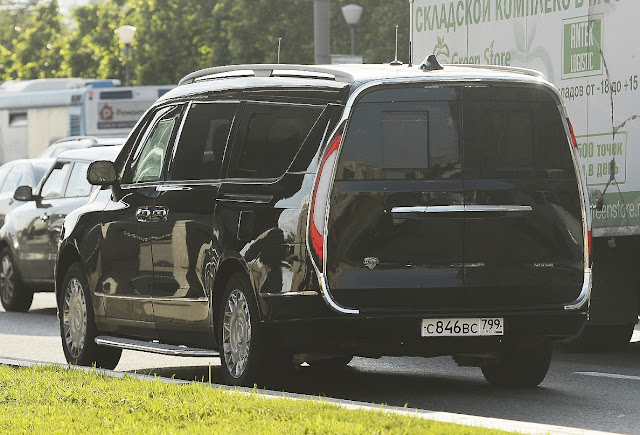 The vehicle is armored and has hatches in the windows allowing to shoot back while driving. 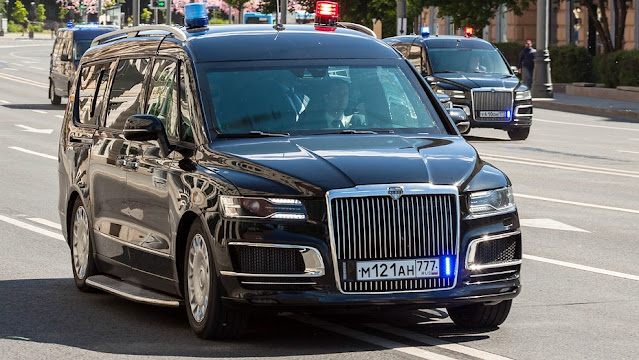 They have steps to allow the bodyguards to be outside in case the president moves on foot. 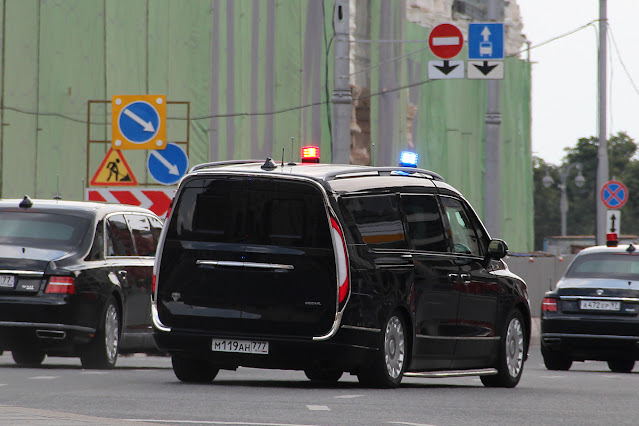 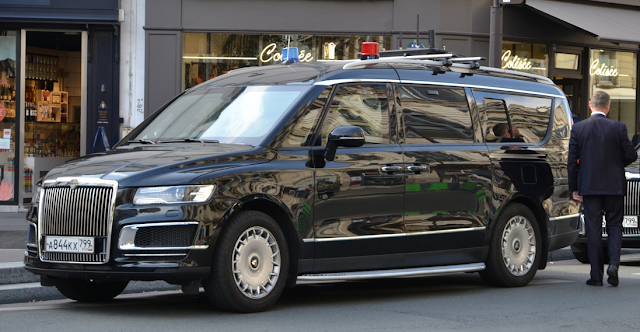 These videos show the escort methods,
with the streets cleared in advance and the presidential convoy moving at high speed, to avoid IEDs (improvised explosive devices) that could be dropped on the route of the procession.


In the streets of Moscow 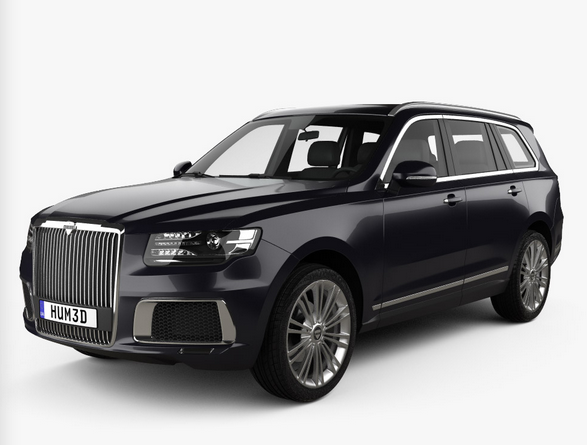 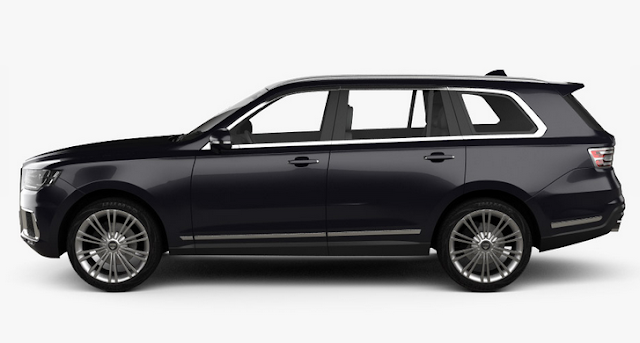 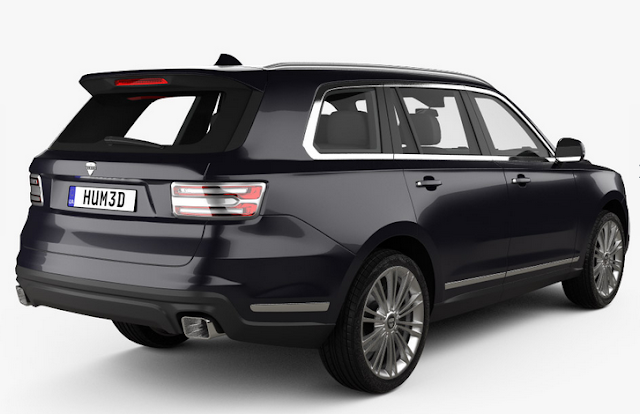 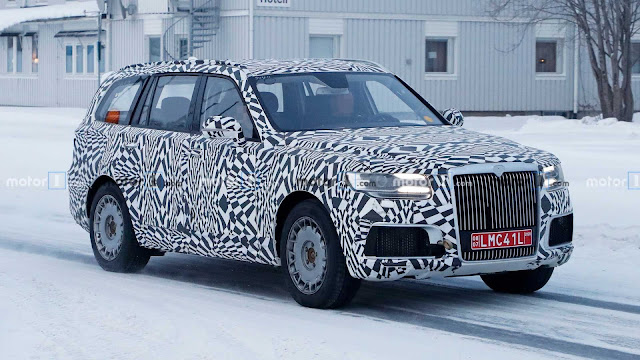 Final tests are currently being carried out with a view to homologation. 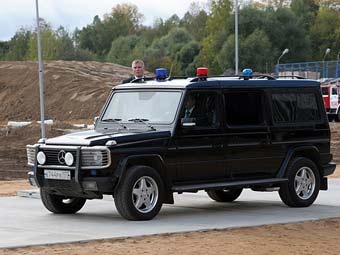 Previously, the vehicles that surrounded the Russian limousine were Mercedes "M-Class". 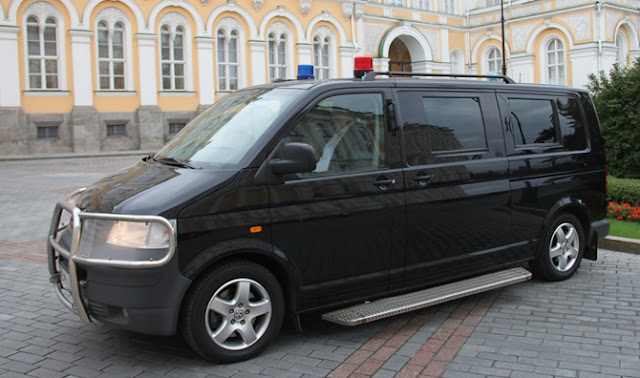 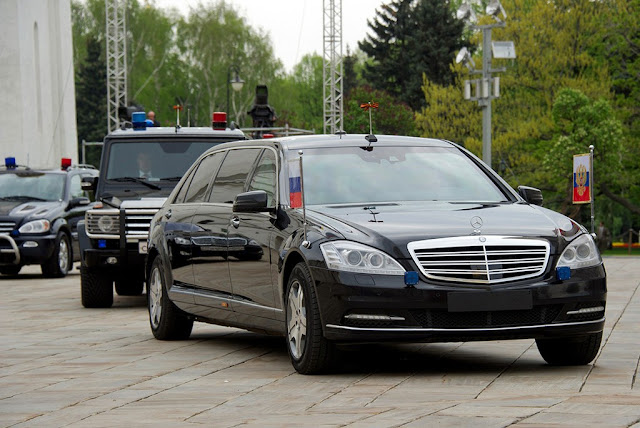 These vehicles took the same protective bubble position when moving around the presidential limousine as you can see on these videos: 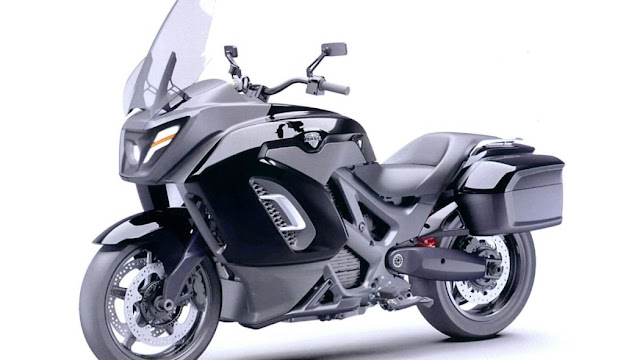 A project of escort motorcycle is also under study with the AURUS Escort which would probably be 100% electric...

Currently, the escort motorcycles are BMWs. 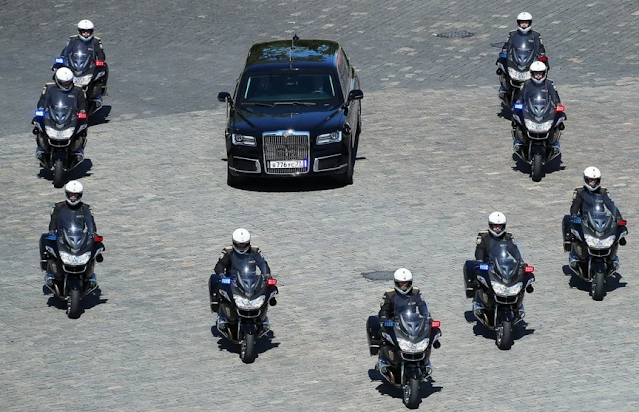 They are used during invitations of the Russian President for counterparts visiting his country, 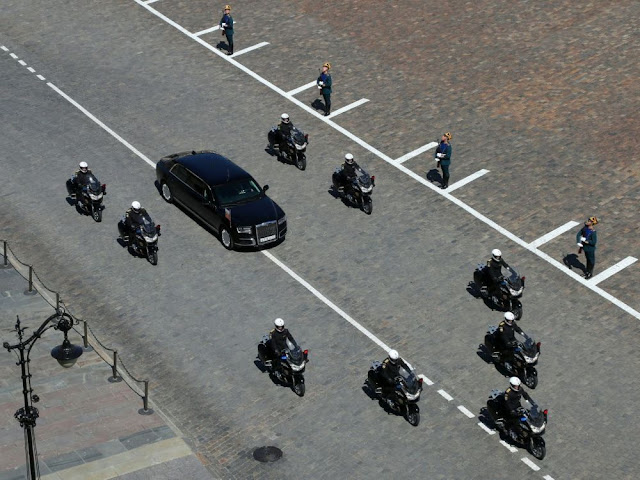 or during special parades, as here, during the presidential enthronement of Vladimir PUTIN in 2018.
Videos in May 2018 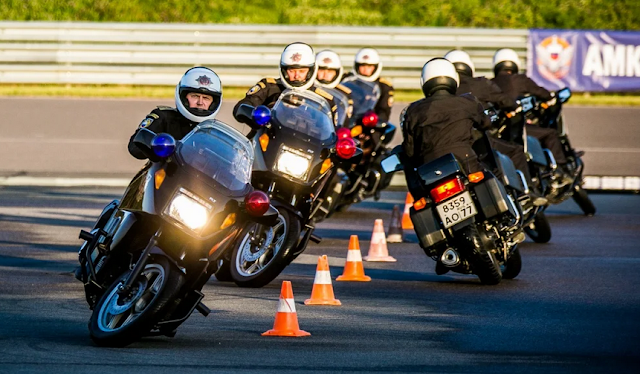 The trainings are regular to master their bike. 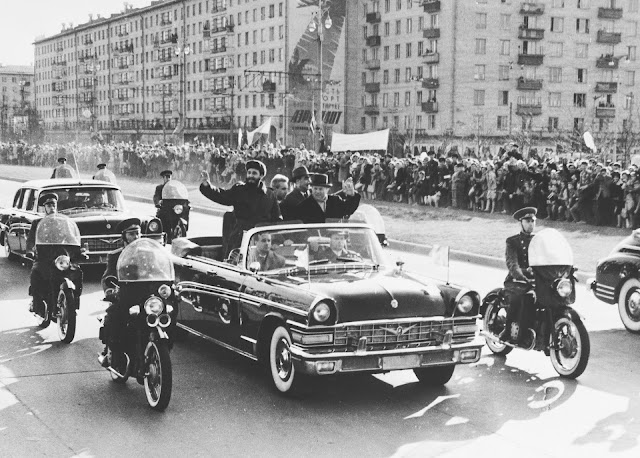 Visit of Fidel CASTRO with the Soviet president Nikita KHROUSHCHEV
in the 60's in Moscow
The motorcycle escort appeared in the middle of the last century, during the Soviet era. It accompanied the state leaders and important guests of the USSR. 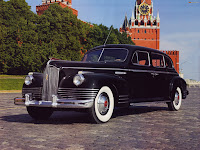 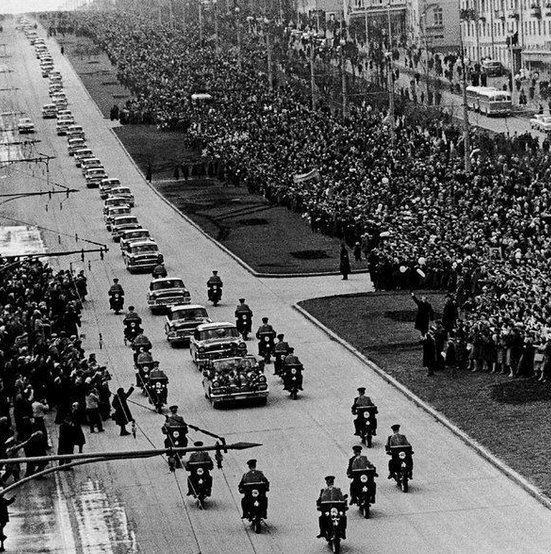 Triumphal procession on April 14, 1961 of cosmonaut Yuri GAGARINE in Moscow
It was also intended to protect the VIP's limousine as an additional shield in case of an attack.
Indeed, this principle of protection bubble follows the Assassination of King Alexander I of Yugoslavia in 1934 and imposed a pro-active security around the Presidential limousine. 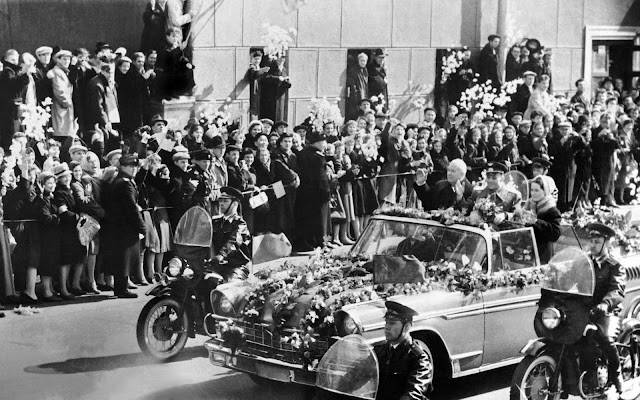 Triumphal procession on April 14, 1961 of the cosmonaut Youri GAGARINE with the Soviet president Nikita KHROUCHTCHEV in Moscow
Another task was to be able to exfiltrate the VIP in case the limousines were blocked in a narrow street. 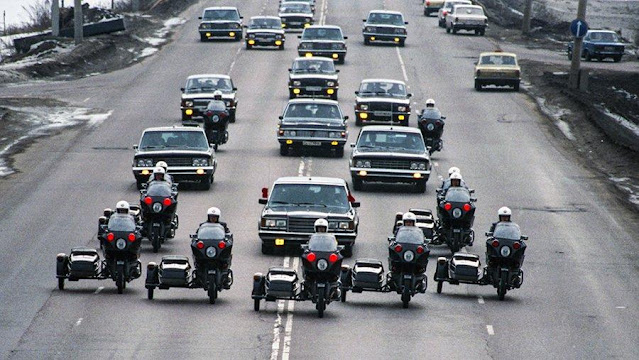 Procession of Soviet President Mikhail GORBATCHEV in 1991
An attack in 1969 demonstrated the importance of side protection vehicles. A government motorcade was attacked by an individual, disguised as a police officer, who opened fire on the main car. One of the motorcyclists threw his motorcycle at the gunman. The passengers of the limousine were not injured, unfortunately the driver died. The people on board were cosmonauts on their way to the Kremlin. 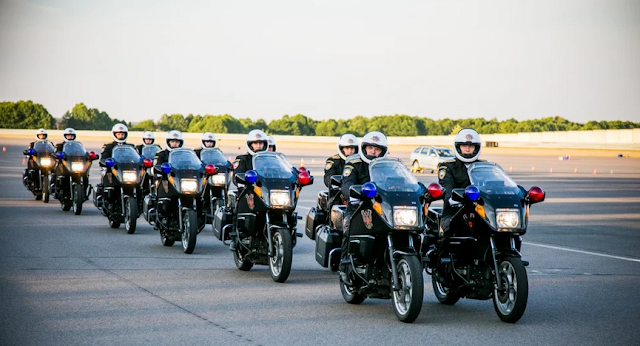 However, the motorcycle escort is less in demand in recent years.
Indeed, the powerful armored vehicles around the presidential limousine provide a better armor than a simple motorcycle and its rider. 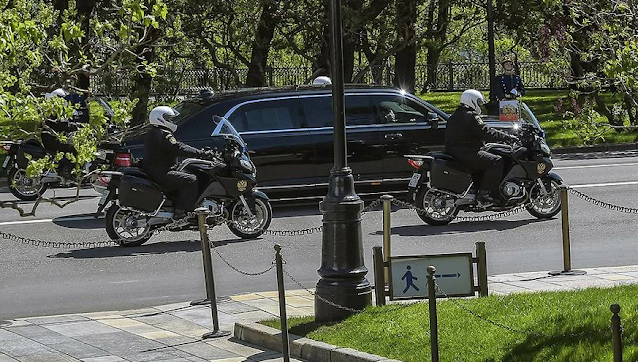 Moreover, the Moscow weather is sometimes harsh, with cold winds, rain and snow, putting the escort biker to a severe test... 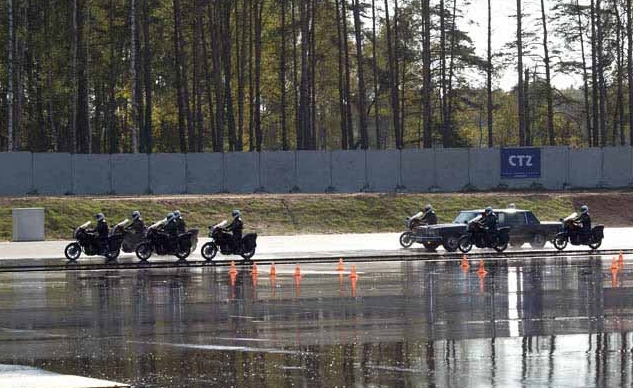